What’s the podcast about?

Greg is the host of the smash hit BBC podcast series ‘You’re Dead To Me’, which pairs up top comedians with top historians to deliver funny, fascinating explorations of the most interesting, surprising, and overlooked subjects from global history.

In its first week it debuted at Number 1 in the Apple Podcast Charts, in 2019, and was named among their Best of 2019. It has since become a BBC Sounds flagship podcast, with over 62 million downloads and plays since its launch. 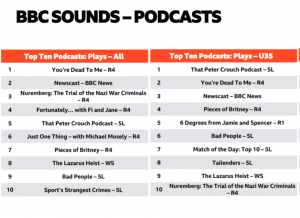 Series 5 launched in 2022, becoming the most downloaded BBC Sounds podcast for people aged under 35, and number 2 overall behind BBC Newscast. Episode 1 featured guest star Stephen Fry talking about the life of Frederick the Great of Prussia.